Buy a Star/Feed a Family

Rhinebeck Responds will partner with Sinterklaas to address food insecurity in our community.

For every beautiful Sinterklaas star sold in a Village store (or purchased at the Sinterklaas website), RR will put $10 in a fund to buy grocery gift cards from local food outlets… and now Farms 2Table will provide 100 holiday meals.

Buy one (or 10) stars online at the Sinterklaas website.
Pick up five stars at a Village store.

Place those stars in your street-facing windows as a symbol of hope in a dark time.

Show that we are “all in this together.”

A NOTE ABOUT “BUY A STAR/FEED A FAMILY”

Thanks to all of you who have helped our neighbors through Rhinebeck Responds.

We are now mobilizing community support for two primary areas of concern: support for local small businesses and outreach to individuals and families in need, especially those “outside the safety nets.”

In both areas, conditions appear to be getting worse as a second wave of Covid moves up the Hudson.  Our restaurants must overcome the loss of outdoor dining. Our vulnerable families must cope with rising unemployment and shrinking financial reserves.
In response, we are launching a new campaign to raise our collective spirit, encourage local shopping–and, most importantly, make a dent in the growing problem of food insecurity.

Here are the facts: Hunger is spreading, in the Hudson Valley and around the country.  Last week, the Washington Post reported

“A growing number of Americans are going hungry. 26 million now say they don’t have enough to eat, as the pandemic worsens and holidays near… More Americans are going hungry now than at any point during the deadly coronavirus pandemic— a problem created by an economic downturn… and compounded by government relief programs that expired or will terminate at the end of the year.”

According to the Post “…it is likely that there’s more hunger in the United States today than at any point since 1998, when the Census Bureau first began collecting comparable data about households’ ability to get enough food.”

In Rhinebeck, the volume of food assistance delivered by the Church of the Messiah has increased four-fold since the spring. 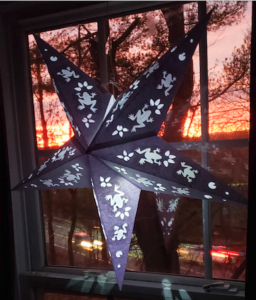 Here’s this year’s star with the frog as the honored animal.

They’re beautiful.  Get one (or ten) right now. Then take it and “show us your star!”

Place your Sinterklaas star in a street-facing window as a symbol of hope in a dark time. And throughout the holidays, take a part of your holiday shopping budget and spend it in our local shops.

They need your support.

And while you’re in those local stores…buy a star and feed a family.

Get Your Star - Feed A Family

From all of us at Rhinebeck Responds…
Thank you. Love to all. Be safe.